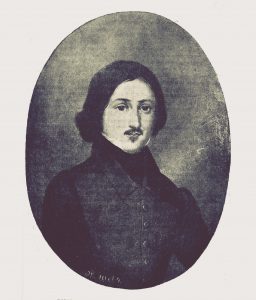 Also known as Nikolai Gogol, Mykola Hohol (1809–1852) was a Ukrainian-born writer who wrote primarily in Russian. At nineteen, after graduating from the Nizhyn College in the Chernihiv region of Ukraine, he moved to Saint Petersburg, Russia, in pursuit of his writing ambitions. There, in addition to writing, he briefly worked as a clerk, as a teacher at the Institute for Daughters of the Nobility, and as a history lecturer at the Saint Petersburg University. After living there for eight years, in 1836 he left to live in Western Europe. Hohol lived primarily in Rome. returning to Russia four years before his death in 1852. During twelve years of his life abroad, Hohol travelled back to Russia for only two visits. He also made a pilgrimage to Jerusalem in 1848.

Hohol’s first major literary success came in 1831–1832, when a collection of his short stories Vechera na Khutore bliz Dikanki (Evenings on a Khutir near Dykanka) was released as a two-volume publication. The next two-volume compilation of Hohol’s works, entitled Mirgorod (Myrhorod), appeared in 1835. This collection included the first publication of his famous historical novella Taras Bulba (the second publication, in 1842, differs significantly). The two compilations are captivating portrayals of Ukraine as Hohol experienced and imagined it. His other most famous works were published the same year, including a collection of works called Arabeski (Arabesques), the play Revizor (The Inspector-General), the play Zhenitba (The Marriage), and the satirical story Nos (The Nose). After moving abroad Hohol continued to write, producing works including the short story Shinel (The Overcoat, 1841) and the first of three parts of his epic work Mertvye Dushi (Dead Souls) (1842) (the other two parts were never finished).

There are hundreds of translations of Hohol’s works, with some of his books being translated dozens of times in the same language. He is one of the greatest writers of the 19th century, a master of the genre of romanticism, especially romantic grotesque, and also a preeminent figure of European literary realism.

Portrait of Mykola Hohol by Taras Shevchenko, circa 1840.