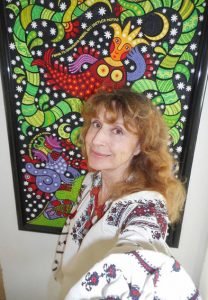 The two worlds that most often find their expression in Svitlana’s works are exotic Australian nature and the fantastic realm, which takes its beginning in the artist’s imagination and becomes alive in her paintings. Svitlana lives in Australia since the early 1990s. She obtained her initial art education in her native city, Kyiv, Ukraine. Svitlana’s illustrations to three Ukrainian folk tales, The Mitten, The Sparrow and the Bush and The Little Straw Bull put a new spin on old favourites.