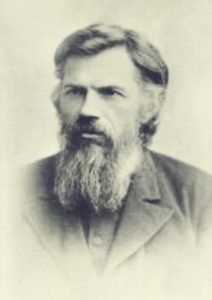 A Ukrainian historian and ethnographer, Petro Yefymenko (1835–1908; pseudonyms, Petro Odynets and Tsaredavenko) studied in Kharkiv and Kyiv. His ethnographical topics of research included demonology and mythology. He wrote about Polisun (a deity, a patron of wolves), upyri, superstitions and other similar topics. He was exiled to Russia (initially Perm and then Arkhangelsk provinces) in 1860–1873. In 1873 he was transferred to Voronezh town, Russia, and in 1876 he was allowed to choose his place of residence. In 1877, he returned to Ukraine, firstly living in Chernihiv and then in Kharkiv. He continued to write and publish his works in Ukraine and Russia. In 1887 he became seriously ill, although he did not finallypass away until 1908.

Petro Yefymenko’s wife Oleksandra (nee Stavrovskaya) was a historian, and her monographs on the history of Ukraine earned her the distinction of being the first woman in Ukraine and the Russian Empire to be awarded an honorary professorship.

Our translation of Petro Yefymenko’s Sbornik Malorosiyskikh Zaklinaniy (A Collection of Ukrainian Spells, 1874) is to be released soon as a part of the Ukrainian Scholar Library series.