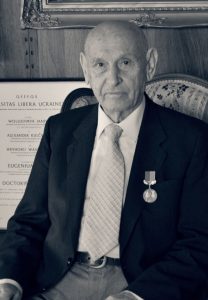 Eugen Hlywa (1925–2017) was a psychotherapist, writer and public figure. Born in Ukraine, he migrated to Australia after the Second World War, where he spent the rest of his life. Well-educated, he was fluent in English, German, Polish, Ukrainian, Latin and Russian. In addition to articles on professional topics, he wrote extensively on topics of philosophy, politics and history. Five of Eugen Hlywa’s monographs were published during his life. Eugen Hlywa was very much involved in preparation of Sova Books’ Ukrainian Scholar Library series. He has also contributed to forewords and commentaries, and he has edited several books which will soon be published.